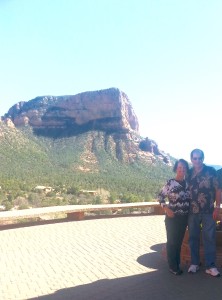 Gary and I took a day trip to Sedona on Friday. If you’re not familiar with Arizona, this is an area with a whole different landscape than the desert city where I live. It’s famous for its amazing scenery. There’s beautiful ponderosa pines, instead of the magnificent saguaro cactus and ginormous red rocks, similar in color variations to the Grand Canyon, but different in that the rock formations go above ground, (way above) instead of underground. We didn’t have a specific plan other than to get out of the big city, relax a bit, breathe some cleaner air and change the view.

As we admired the different buttes and mesas, Gary picked out a ‘squirrel’ looking rock (big squirrel!) …kind of like when you see creatures in cloud scenes. Later, from a different vantage point, this rock no longer looked like a squirrel. Many of these larger rocks have names from their visual perceptions, such as Bell Rock and Cathedral Rock. We liked finding and envisioning with our own creativity.

Perception is an amazing thing. So much of our lives are based on how we see things and since we are individually created, we see from a unique viewpoint. That can be a good thing. What’s been really important at times in my life, is how others see me. I’ve often cared way too much about how others see me and what they think of me.

What’s absolutely changed my life is to recognize how God sees me. Me. Wow. I’ve come to see this as my true identity. He sees me as His Beloved. That is amazing. Sometimes what He sees surprises me. He sees me as a risk-taker. He sees me as one who enjoys beauty and appreciates beautiful things. How do I know? Well, I was gutsy enough to ask. And to expect an answer. Those are some of the things I heard. Recently.  No, I’m not nuts to hear from God, I’m listening and open and believe He cares enough about me to reveal His heart to little ole’ me.

Be adventurous and ask Him how He sees you. Since we are created in His image, what He sees will probably be something that looks like He does; character traits of God that He’s designed. Maybe we’re not seeing it in ourselves, but He knows and challenges us to live up to it. We have such value to our Abba (Daddy) God.

As we were having lunch on the patio today, I heard a noise that sounded like it came from our orange tree. Suddenly a man’s head poked over our wall fence. He looked at me about the time I saw him, both of us a bit surprised, then he asked if he could pick some of our oranges. Well, that was kind of random! I assured him he could if he could reach them, (since we’d already picked most of the reachable ones). He thanked me and helped himself.

Sometimes we have only moments to form a perception of others, sometimes we have it nagging at us constantly on the news channel and we still probably don’t know their true identity. God’s view of me doesn’t change with where I am in life or the season I’m in, however, His desire is that I persist in growing in His likeness. Unique, but looking similar in character to my Father.